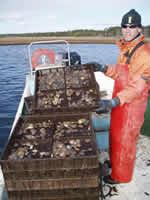 
Educational opportunities afforded by the work carried out by the department are realized in forms such as school group and open house tours, as well as educational displays at community functions. As of 2016, we embarked on East Hampton's first oyster gardening program (EHSEED-East Hampton Shellfish Education and Enhancement Directive (PDF)). Currently there are approximately 100 oyster gardeners in the program.

Research and experimentation regarding shellfish culture, its subsequent success in the wild and the status of the resource is undertaken and reported on regularly. These initiatives are often funded and validated by scientific research grants or from state or county dedicated environmental trusts. Presentation to and collaboration with the scientific and/or policymaking community is part of this process. In this vein, small scale public/private shellfish culture initiatives, including instruction in culture technique, have been undertaken by the department and will continue, subject to affirmative input by elected officials.


An annual reporting of all departmental activities is prepared annually for presentation to town, county and state policymakers and associates in academic and non-profit institutions. Reports include species by species production statistics and value, dissemination location information, results of research initiatives, outreach efforts, and a plan for the following year's operations. Reports can be found online.


The East Hampton Town Shellfish Hatchery was launched in 1989. Housed in one of the last remaining structures from the World War II Naval Torpedo Testing Range on the shore of Fort Pond Bay in Montauk, its development was made possible by a grant to East Hampton Town by New York State.

The Town's desire to undertake a serious shellfish seeding program had been stimulated by a region-wide series of smothering algae blooms (brown tide) that first appeared in 1985, devastating the area's shellfish resources.